You are here:
Cultural Critiques 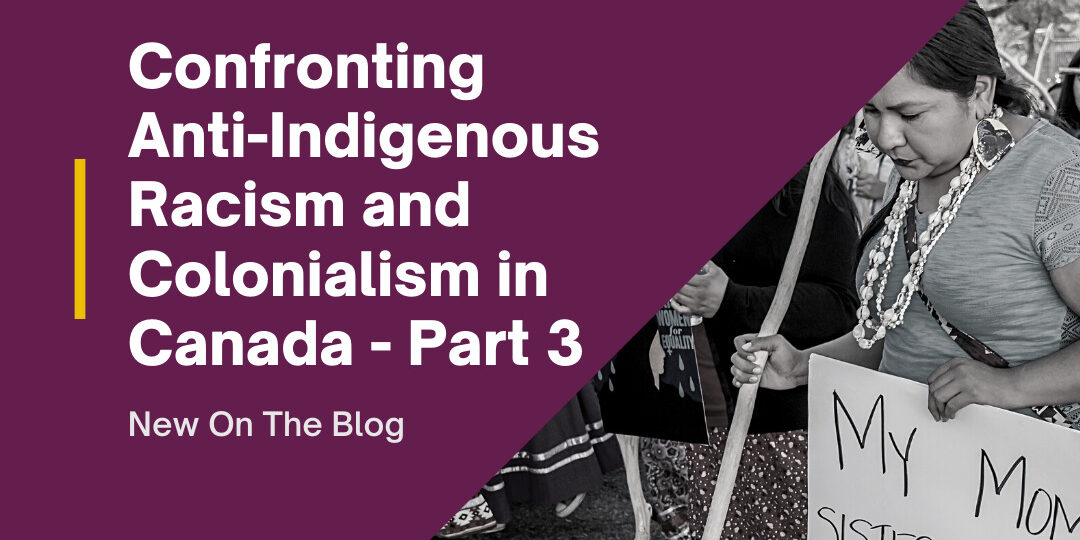 Over the last two posts in our confronting anti-Indigenous racism and colonialism in Canada, we’ve explored the historical and contemporary impacts of colonialism on Indigenous Peoples, from contact to the present day and across a number of societal systems.

So far, we have examined these impacts on Indigenous communities as a whole. However, some demographic groups of Indigenous Peoples have been continually harmed by colonialism in unique ways because of the intersection of other legacies – notably patriarchy.

Many Indigenous and non-Indigenous scholars who study colonialism have recognized that patriarchy was and is an essential part of colonialism – for instance, some have suggested that the first act of colonial violence was gender-based violence. Patriarchy played a key role in erasing Indigenous cultures and enforcing European values, especially as they relate to gender and sexuality.

Before the arrival of European settlers, many Indigenous Peoples did not subscribe to patriarchal gender hierarchies. Women were seen as complementary to men and, in some cases, transcended gender roles entirely. Indigenous women held positions of power, leadership, and status. Their input on social and political matters was valued, and they played important cultural and spiritual roles in their societies.

However, European colonizers saw Indigenous notions of gender as being in contradiction to their ideals. In Europe, women were seen as fragile and domestic. They were expected to marry, bear children, and support their husbands, while men took on leadership roles at home and in society at large. Colonizers also saw how Indigenous women were valued, and made many attempts to undermine the power and position that they played in keeping Indigenous cultures intact.

Since contact, European colonizers have made it an ongoing project to enforce patriarchal systems.

Sexism: From the Indian Act to a Complacent Justice System

These early colonial efforts to ‘civilize’ Indigenous women were rooted in the White supremacist and patriarchal beliefs that Indigenous women were ‘promiscuous,’ ‘deviant,’ and ‘immoral.’ Those stereotypes have continued to harm Indigenous women who currently experience disproportionately high rates of sexual assault and domestic violence, and there is a history in Canada of Indigenous women being forced or coerced into sterilization in hospitals during labour or after giving birth. Indigenous women also have lower levels of educational attainment than their non-Indigenous counterparts and are more likely to be unemployed and living in poverty.

However, along with the gender hierarchy, patriarchal colonialism also forced heterosexism on Indigenous Peoples.

Heterosexism: The Erasure and Exclusion of Two-Spirit People

Missionaries and settlers viewed any gender presentation or sexual behaviour that was not heteronormative as deviant and immoral. Christian values of heterosexuality were enforced through the curriculum of the Residential Schools. Two-Spirit Indigenous people were condemned and punished for not conforming. In 1841, the colonial government made same-sex relationships punishable by death; the punishment was reduced to life in prison in 1869.

Many understandings and representations of Two-Spirit Indigenous people were lost or erased by the imposition of patriarchal Christian values. This erasure has continued to marginalize and endanger Indigenous Two-Spirit and LGBTQ+ people.

Because of their intersecting marginalized identities, Indigenous Two-Spirit and LGBTQ+ and people are often left without a sense of community or belonging. Some Indigenous communities have adopted the homophobia and transphobia of colonization, which had meant that LGBTQ+ organizations and services –  including mental health services and homeless shelters – are often ill-equipped to provide the culturally sensitive support Indigenous Two-Spirit and LGBTQ+ people need.

The Way Forward: Your Role as an Ally and Accomplice

The violence and erasure of colonialism cannot be addressed without acknowledging and addressing all of the ideologies and legacies that sustain it. Naming and confronting the patriarchal nature of colonialism and the ways it has harmed Indigenous women and Two-Spirit/LGBTQ+ people is an essential step towards equity for all Indigenous people.

One valuable approach is adopting Indigenous feminist theory, which specifically confronts and counteracts patriarchal colonialism and the way it has dominated Indigenous bodies, traditions, and lands. You can listen to, learn from, and centre the voices and work of Indigenous Two-Spirit and LGBTQ+ activists like Aiyanna Maracle, Alec Butler, and Diane Rowe. There are also organizations and movements for Indigenous women and Two-Spirit/LGBTQ+ Indigenous People you can donate to, volunteer with, or amplify:

Stay tuned for our final blog post in our series on confronting anti-Indigenous racism and colonialism in Canada and more ways to stand for and with equity and justice for Indigenous Peoples.